Those that have been abandoned are accepted by the ocean. 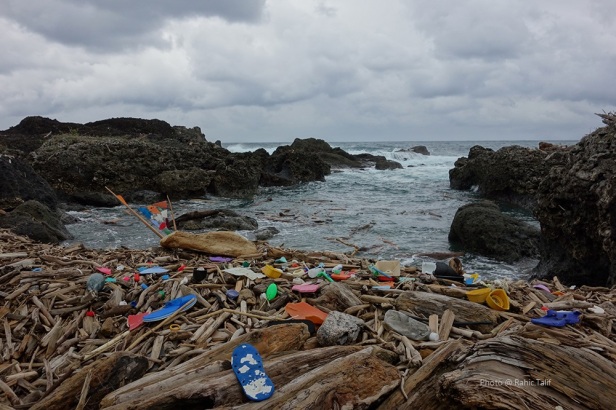 The Main Hall of National Museum of Marine Science and Technology opened in January 2014. The Museum invited Rahic.Talif to plan and create a serial of artworks for environmental education that themed on the culture of ocean. Rahic.Talif’s family has been living in the Makotaay tribe in HualienCountry for generations. According to Rahic.Talif, with their traditional lifestyle, about 70 % of daily needs are supplied by the ocean. There is no such term as “garbage” in their traditional language. The term “Lakaw” in Amis is used to refers to garbage nowadays, but it originally meant weeds and leaves—things that burnable. The most troublesome “Lakaw” are shells, for they are hard to burn down. However, while we used to see shells on the seashore, nowadays they have been replaced by lots of plastic caps, slippers and shreds. What had once been carefully wore and used are now discarded, piling up disorderly by the seashore, causing damage to the ocean.

The four sets of artworks are largely composed of materials Rahic.Talif picks up in his daily walk along the shore of the Pacific Ocean in his hometown. The questions Rahic.Talif keeps asking are: where are their owners? What did they see? If those discarded materials have their own will, where would they go? How they want to continue “living”? Rahic.Talif reconstructed those materials into artworks that show the “inconsistency” in visual, aesthetical and cognitional aspects. Through the eyes of those discarded materials, he intends to display different angles for the audience to look and to ask themselves this question: What kind of “beauty” do I see in the ocean? 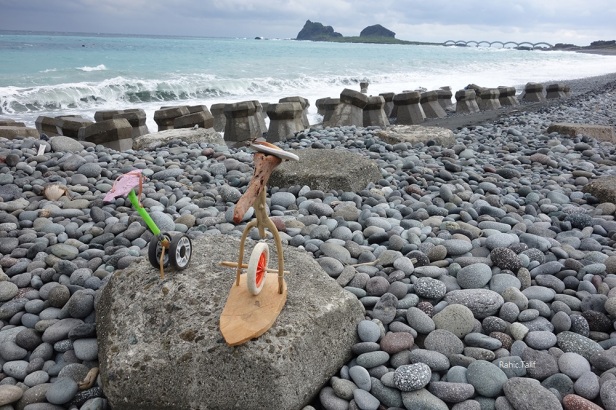 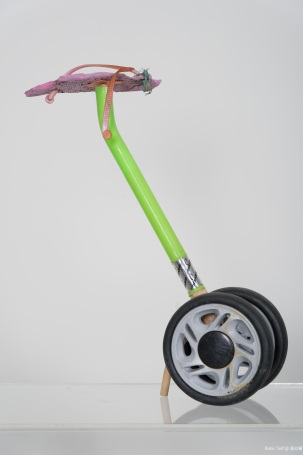 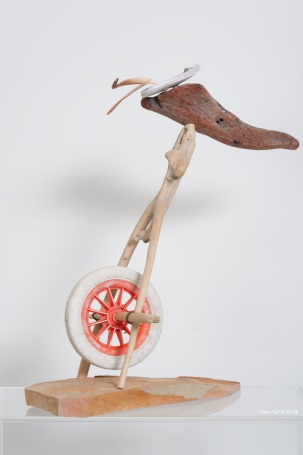 “In the past, we can’t get close to her—nor was it easy.
When some people did walk up to her,
They found so many things on the rocky shore,
Such as seashells, fishes, seaweeds, and so on…
Although nowadays getting there is so fast and easy,
It turns out the ocean is filled with things discarded by people.”

In this exhibition, contradictory images of the Pacific coast are juxtaposed: the natural and the artificial, the cherished and discarded. In the name of “beauty”, I expose, both in people’s desire for fishery harvesting and spiritual need for the natural landscape, the taking-for-granted attitude they apply toward the abundant resources they find in the Pacific Ocean.

In the past, by living in traditional manners, about 70 % of our daily needs were taken cared of by abundant resources in the ocean. There is no such term as “garbage” in their traditional language. The term “Lakaw” in Pangcah is used to refers to garbage nowadays, but it originally meant weeds and leaves—things that burnable. The most troublesome “Lakaw” are shells, for they are hard to burn down. However, while we used to see shells on the seashore, nowadays they have been replaced by lots of plastic caps, slippers and shreds. What had once been carefully worn and used are now discarded, piling up disorderly by the seashore, causing damage to the ocean. Here, the term in our traditional language became the dialectic between the past and present, civilization and declination in the evolution process of human beings.

The deplorable image in which discarded wastes that had disappeared from the arena of people’s daily life were found on the coast, piling up, seems contradictive to yet inseparable from the magnificent landscape of the Pacific Ocean. Sharp broken edges of the discarded wastes cut across time and space, prophetically reveal a future that has been eroded, while at the same time mimicked a kind of compromise that can almost go beyond the contradiction as a result of being rolled, smoothed and faded in the wind for a long time. However, such mimicry sends strong messages to us as soon as we pick the waste up–they accuse the civilization of abandoning them, while pleading for the history and environment that have been gradually worn out.

My family has been living in the east coast of Taiwan for generations, and I’ve walked hundreds of times along the coastline of Pacific Ocean. In my walks, I often fill my hands and backpack with these broken man-made products, almost like having a compulsion to collect. I always question my hands, and regain my sanity later in the walk. I’ve lost count of how many times I’ve been through such emotional cycle, but the time finally came when every time I bend down to pick up things, my heart was filled with passion boarding on ecstasy. The movement of picking up became a purification of myself and developed from inside of me into a spiritual enjoyment that is pure and goes beyond aesthetic experiences.

The idea of “beauty” also comes from the fact that most of the wastes in the sea were important inventions in certain stage of human development, or had been something picked up carefully by the original owner out of his or her own aesthetic experiences, but were abandoned when they got old or were no longer considered beautiful as time went by. The things in deplorable condition in my hands have been owned and given up, and were washed up, even just for a second, by the waves that have been there for billions of years. These things inherited the original subjectivity that was given to them in the first place, which remains there while they drift. They are the record of people’s thoughts and experiences, embodying the persistency and potential energy that give life a second chance.

To me, it is a movement of picking up wastes for the civilization. In a process people collectively ignored, where people’s will is dissolving, through the movement of collecting I also try to collect the origin that has been forgotten, to defy the doom that led us to destruction, to trace against the flow in my trip of drifting, to walk from the foulest zone to the purification as if being thoroughly purged. I recompose these embers of life or frame them in different containers for them to be displayed praisingly in front of the audience to create a space of conversation allowing for meditation and silence. In such space, we no longer evade the rashness in real life, and instead, we look right into each other’s eyes honestly.

Limo o tan / Cherish
In the past, those being captured in the fishnet
Were so abundant,
We can even choose what we want or not.
Today, the fishnet is still full,
What have been captured, however,
are gaudy fragments that have no place to go,
Could we ever again have the clear seawater where we can choose something from? 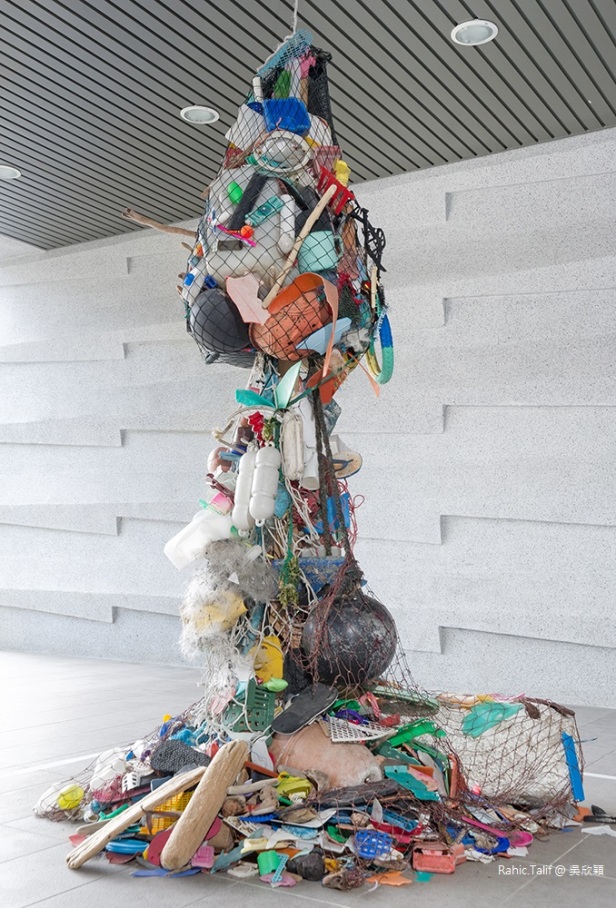 Kinaila / What we once had
What has been abandoned by people are accepted by the ocean.
The seawater keeps touching it, cherishing it;
However, the bottle caps that had been used as the lock to keep the clean drinking water safe,
When they come to the ocean, can they also keep our ocean safe?
Why do those that have been feeding us gradually disappear?
Between taking too much and giving up too easily,
Can we still remember the teaching of our ancestors through toko,
That we should survive and shrive with our own excrements. 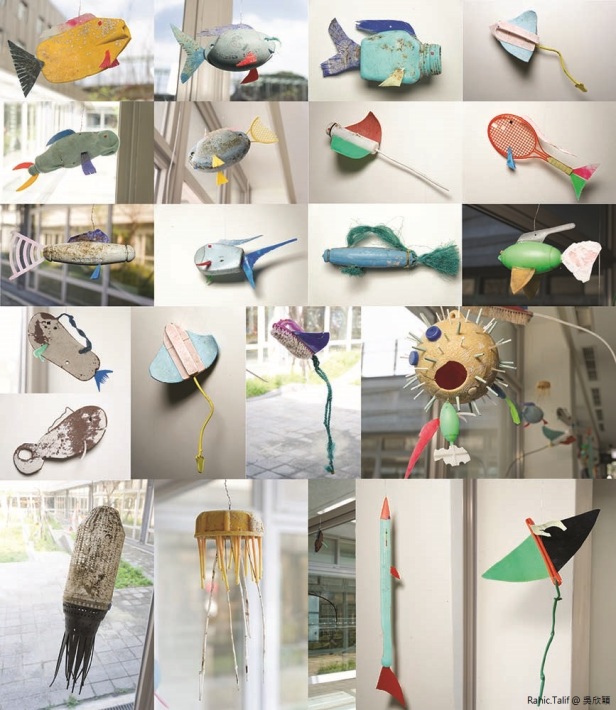 The glass
Once upon a time, we were broken, with edges sharp enough to hurt people. It’s this blue and gentle ocean that provided us with a place to stay, offering its praise that we are shining like diamonds.

The bottle cap
People invented the bottle cap to guard against filthiness, to keep the water inside the bottle clean. Now the caps are floating in the ocean, scattered along the seashore—do they also want to guard the ocean?

Toko
Tokos grow on their own excrements. Some of us do everything they can to avoid their own culture, but we must remember that we have also been living on Toko’s excrements, and become stronger.

The brick
Failing to remember the past that has been abandoned, we become smaller and smaller under the touch of the pacific ocean, until we are as small as tiny precious stones, nearly invisible, until it’s like we have finally returned to nature. 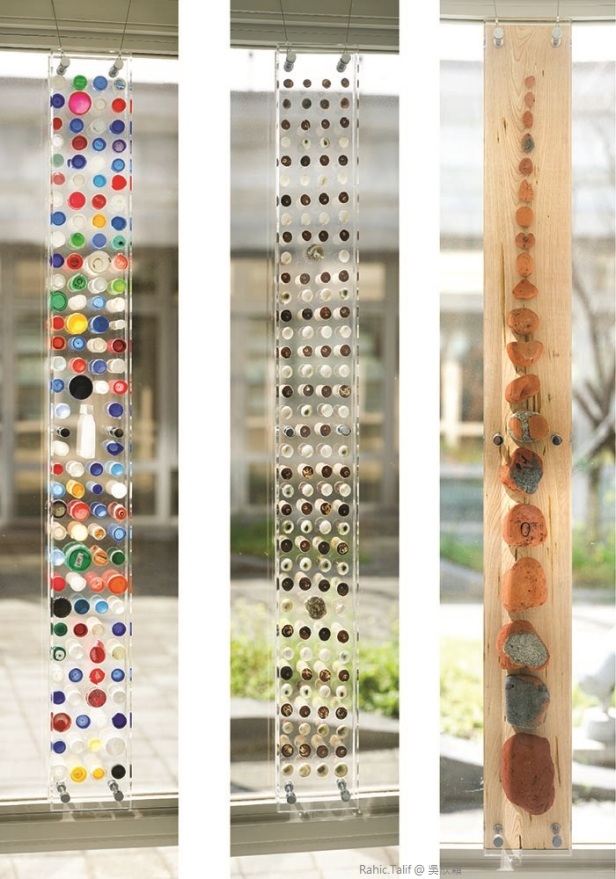 The net
Only later do we know, such a fine net is in fact a wall, and
Since then, we can no longer smell the aroma of seaweeds,
Nor can we remember the happy time when we can play hide and seek with the lovely fish everyday. 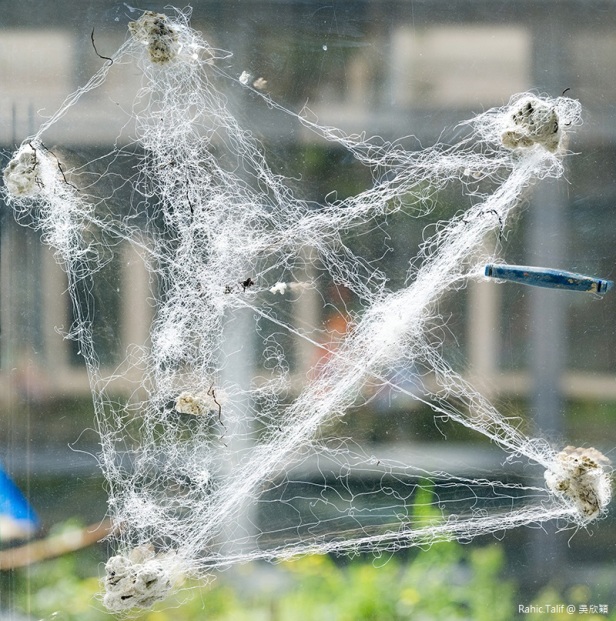 The seashell
In the season where no vegetables are available, it’s the seashells that have been feeding us. In the past, seashells are the most troublesome “Lakaw,” but it’s hard to even find one these days.

The slipper
While roving in the sea, I float along the current. In the sunlight that shines right on me, my body looks almost the same as the fishes, swimming with them at ease. 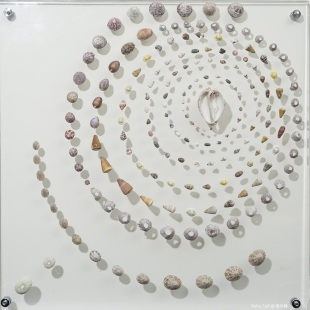 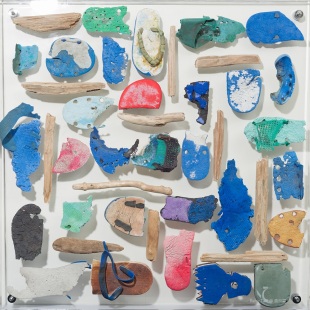 Fayang / The Sail
This sail was blown away by a typhoon and turned to garbage,
The Pacific Ocean accepted it as well.
Slumped into a colorful heap
Next to a wall that makes it hard for us to get to the sea,
Like the colorful people on the beach who dream about sailing away. 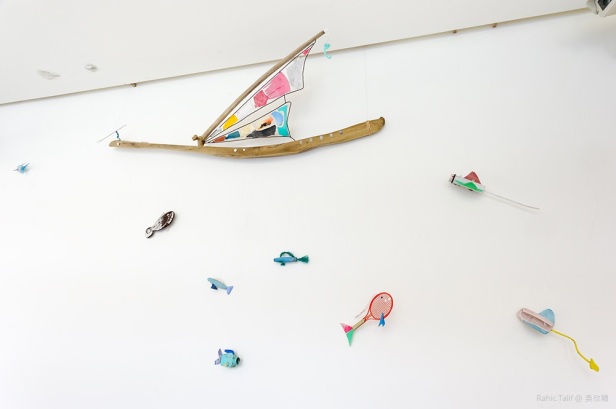 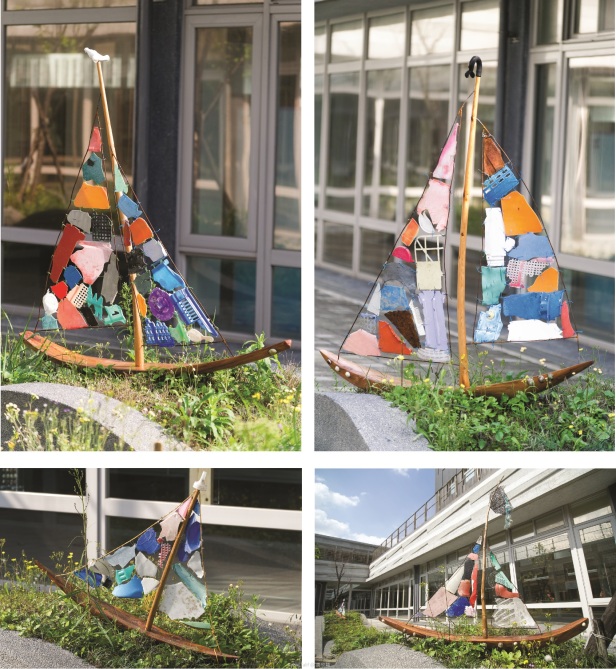 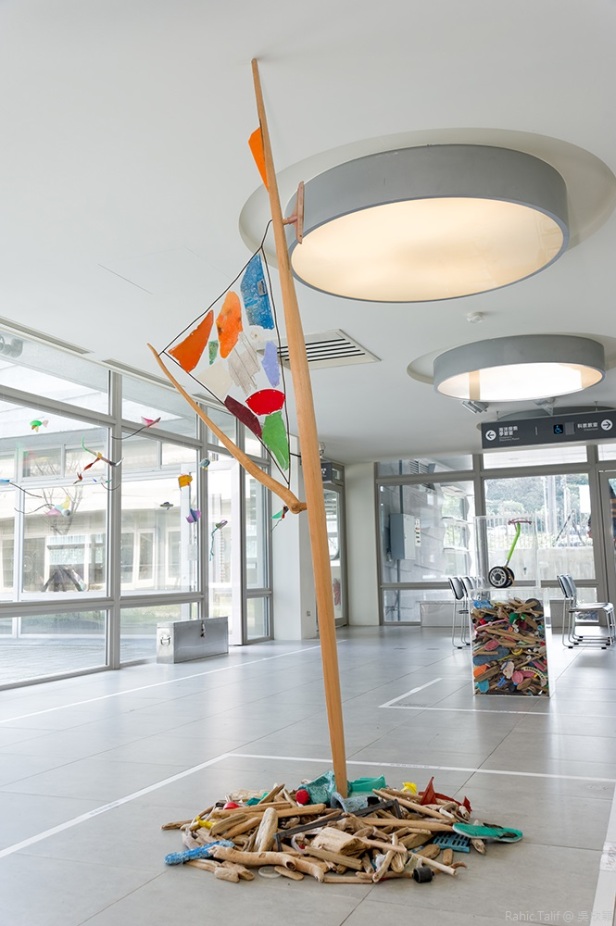 Mafolaw / Immigrating to a distant land
Has Lakaw really become the garbage?
Is it all right to Iloh, to disappear?
For an unknown time,
We have been drifting on the sea like fishes,
While the sea washes away the color on our bodies.
If we help each other,
Can we still go to the many places we have once visited?
Where should we go then?
Can we make it? 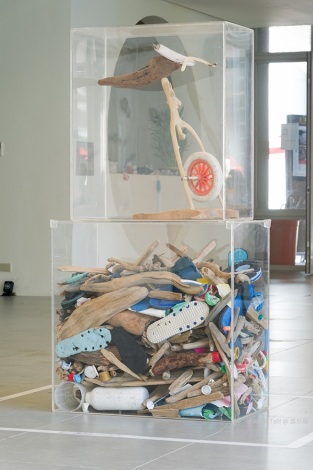 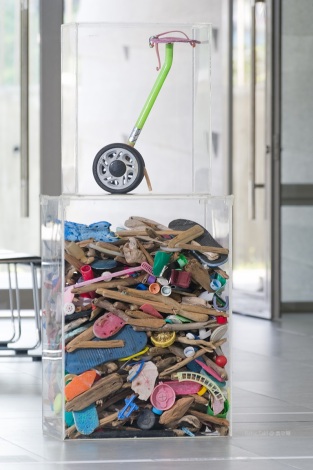 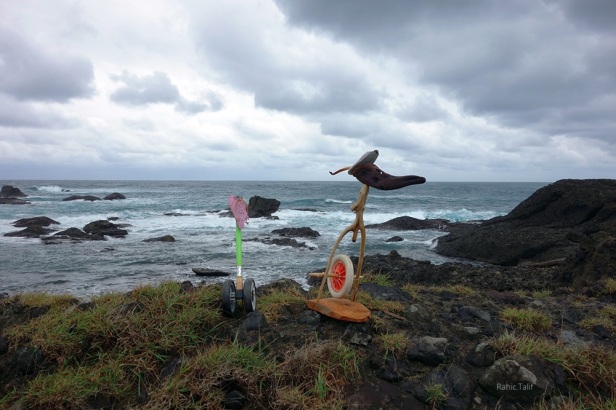 While roving in the sea,
I lost the other half of me
I am no longer the object you discard when you’re done with me
While roving in the sea
I float along the current
In the sunlight that shines right on me
My body looks almost the same as the fishes
I’ve learned to swim around with them
As well as how to swim from the top to the bottom of the sea
My body gets lighter and lighter
I see the sunlight shines across the sky
How I wish I could fly right into the sky
Using all my strength, because I am so light, to fly into the sky
To become something entirely different
‧
I refuse to rove around anymore
Refuse to be looked down upon by human beings,
like garbage on the street
To look downward from the sky
One needs to keep flying toward the world s/he wants
I would rather make the best of my life for myself
Than be doomed for the sake of anyone else

Journey in the space of 50 steps 旅行在五十步的空間